KUCHING: There is always this question of whether studying in universities abroad is better than doing it locally.

And what’s the difference between studying in local varsities and foreign ones?

Nor Hasniah Ibrahim, a lecturer with the Faculty of Cognitive Science and Human Development (FCHSD), Universiti Malaysia Sarawak (Unimas), said what mattered the most was the students’ achievements in their respective fields.

Studying in local universities does not necessarily mean you are at any disadvantage to those studying abroad, she pointed out.

“I believe that academic wise, local universities provide similar experiences and exposures a student should get, namely acquired through properly constructed study plans and facilities,” she added when asked to comment on the pros and cons in pursuing tertiary education abroad and locally.

The lecturer noted perhaps the only difference would be in terms of life experiences where those studying abroad would be exposed to new surroundings, new cultures, and even new routines.

“In that case, students of local universities would have to find ways and chances to get exposed to as many experiences as they possibly could, despite not venturing out to another country,” she said.

Another glaring difference is perhaps in terms of expenditures on the higher currency exchange rate, rental for accommodation and also expensive airfares.

Several local varsity students interviewed echoed Nor Hasniah’s opinion. They expressed confidence that in terms of the quality of education offered local universities were as good if not better than foreign universities.

However, if given the chance, they said they would gladly take the offer.

Most said they had opted to study locally due mainly to financial constraints and also not wanting to be far away from their families.

Unimas student Ezra Choung Hiea Ching said “Quality-wise, I believe there is no difference between local and foreign universities”.

The 24-year-old did not deny that studying abroad would be more interesting, given the advantages in terms of advanced facilities and exposure to foreign cultures and languages.

“However, all of these can be experienced locally now, as local universities have opened up for global courses and made available facilities that are almost on par with universities abroad.”

Ezra opted out to study linguistics in Unimas due to financial constraints, and that she did not want to burden her family, adding: “Sure, there are scholarships or student loans offered out there, but I don’t think that will be enough for my daily expenses.”

Similarly, Brenda John, 24, an undergraduate from Open University Malaysia (OUM) Miri said that she chose to pursue her tertiary education in a local university due to financial constraints.

“Coming from a household with just enough income for daily needs, I think studying locally should be more than enough because you will still get quality education too,” she opined.

At the same time, she also believed that while studying abroad would offer the chance to explore the foreign culture and their people, studying in local universities too would also give one ample opportunity for similar valuable fun and experiences.

Similarly, Afina Ulya Azura Zulmahari, an undergraduate from Universiti Teknologi Mara (UiTM) Shah Alam believes that there is not much difference between studying abroad and in local universities other than the fees.

Afina, who had previously joined ‘Online Autumn School’ with Samara University, Russia under UiTM Virtual Mobility Programme, claimed that she was properly exposed to Russian culture and language through the programme.

“I got to befriend some of the Russian students while learning about their language and culture without leaving home, and I think everyone should experience it as an alternative to studying abroad.”

On the other hand, Awg Haikal Syahrizlan Awg Ismail, a Unimas undergraduate said that lower expenses and proximity to his family were the main reasons why he chose to study locally.

Studying abroad allows individuals to discover and learn new things, namely cultures, languages, and customs of a certain country; so if one is given the chance to study abroad, then he or she should go for it, said the Linguistics student.

“However, I believe the downside of studying abroad would be the high overall expenses – even with the help of student loans or scholarships – especially for those coming from low-income families,” he pointed out.

In his opinion, universities in Malaysia offer similar cultural and educational experiences to the ones overseas, but with the advantage of lower expenditure.

“Malaysia itself is a melting pot of cultures and languages, so instead of going out to venture into foreign cultures, we can opt-out to learn the different backgrounds of our people here,” Awang added.

Meanwhile, Rachel Mina William, a University Malaysia Sabah (UMS) undergraduate expressed that the lower fees in local universities did not depict the quality of the university.

“I believe that local universities are on par with other universities in terms of excellence, professionalism and recognition,” said the 23-year-old.

The Mass Communication student said that if she was given the chance to study abroad, she would grab it and set out on an adventure.

“There are pros and cons to whatever decision we make, and it does not matter wherever we end up because at the end of the day, what matters are the knowledge and experience we acquire from those places,” she concluded.

Meanwhile, it is learnt that some students had no choice but to study abroad as the courses they opted for are not available in local universities.

There are also cases, where the students decide to study overseas after they failed to gain entry into any of the local universities. 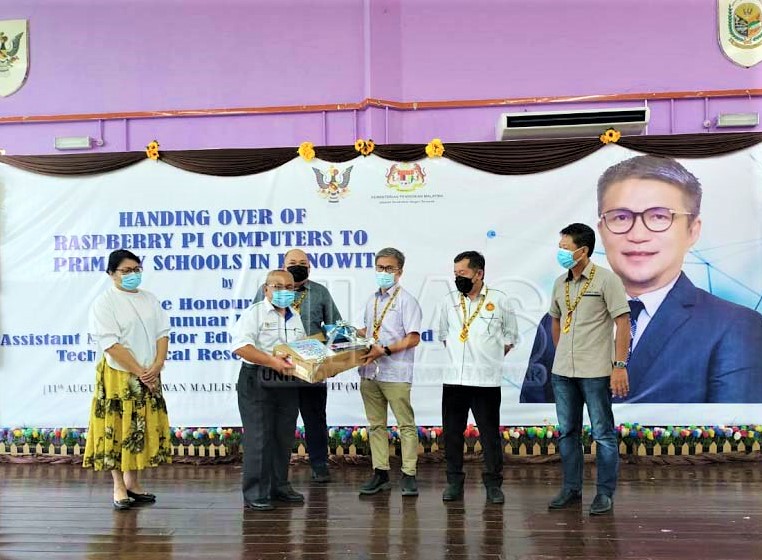 35 primary schools in Kanowit to get Raspberry Pi computers